It was a coincidence that I was reading a book called CONSPIRACY OF FOOLS by Kurt Eichenwald, a 748-page volume on the ENRON scandal that occurred in the late 1980 and broke headlines in early 1990. The book starts with “Behind Thick Corporate walls, the shadows of Wall Street, along the corridors of political power, a scandal is brewing……”

In recent weeks, there isn't a mention of stories of how innocent investors and folks are being cheated of their life savings. It's like a daylight heist right under the nose of regulators, law enforcers, and policymakers. The most recent of all is the alleged misappropriation of funds by Karvy Stockbroking one of the country's premier stockbroking houses on siphoning of client wealth overnight. A friend who has been affected by this called it "daylight robbery by men disguised in pinstripe suits." This case will now go through the channels of the legal system while investors suffer.

Mint ran an interesting piece this week to highlight the 10 scams that have hurt investors over the years. The percentage may be small in terms of those affected but no doubt such stories resonate in the minds of a lot more when they hit headlines creating a general cloud of suspicion on investment schemes, advisors, manufacturers and capital markets at large. 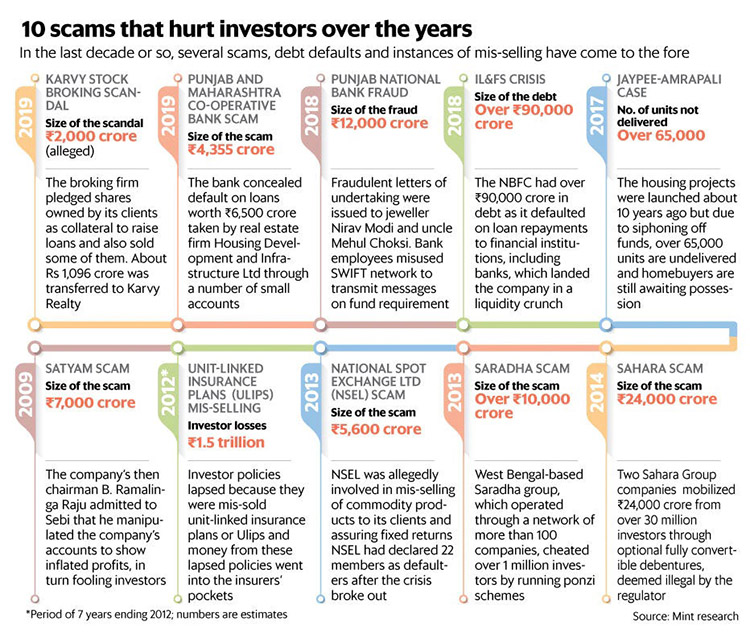 While there is agreement that regulatory oversight needs tightening, punitive action must be taken with the harshest of penalties for economic offenders and fraudsters, responsibility also lies with those signing on the bottom line when handing over their wealth! So, what are the precautions that you must take before diving into an investment solution? There are many but here are three that I found most useful :-

1. If you don’t understand the process don’t get into it:

The devil is in the detail. Clearly understanding the process of investment including third parties involved such as custodians, registrars, etc first, before signing on the dotted line. In most complicated structures there are sheets of pages to sign on with several clauses that you may not understand. This is a red flag.

2. If you don’t understand the risk stay away:

Disclosures of the investment product are paramount in understanding the risks. Important disclosures for example, what is the security that I am investing in, how is the seller remunerated and where is my money being deployed besides portfolio valuation reporting etc are crucial to understand. Another red flag if you find that what is being stated verbally is not documented as part of the terms.

3. Stay away from smooth talkers:

An investment specialist once approached me and stated that investing in an alternate investment fund (AIF) structured by his institution is like buying shares of a bluechip bank. I stayed away and instead bought the shares of the bank. Eight years later, the AIF matured with the investors’ capital being eroded while the institution collected full fees. In the same period, the Sensex scaled new heights with bluechip companies (including the bank stock I invested) paying out a bonus to reward shareholders. Smooth talk is a win-loose strategy adopted and gullible investors fall into the trap!

All the above is fine so where do I put my money? The Securities and Exchange Board of India (SEBI) has taken steps to increase disclosures in capital markets thereby ensuring that the sale and process of investment products are transparent. Mutual funds are regulated by SEBI and have been the recipient of these disclosure norms laid out in two documents (1) The Key Information Memorandum (2) The fund factsheet. Asking your advisor to show you both are crucial.

At Phundo, we use an independent third party non-conflicting research agency to disclose to investors the crucial information as a pre-sale of products on our platform. Each product is linked to this information source online provided by Morningstar.in. Further disclosures are possible by writing to us and we will respond with necessary information. So, look no further, invest through Phundo.com as mutual funds Sahihai for you and your family. SELECT INVEST RELAX the Phundoway!

Mutual funds are subject to market risks, please read the offer document and consult your advisor before investing.